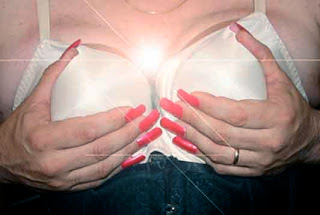 I recently spoke to a new gurl by the name of Stephanie. I was rather impressed with her choice of poses, make-up, and the effort put forth in her photo submissions. I have included a sample of them here in way of encouraging others with similar desires of wanting to be 'seen' as a woman. My primary reason, however, for introducing Stephanie here is that her fortunate situation brought to mind others not so fortunate. And, an idea struck me...
But first of all, the reason why Stephanie is so fortunate. This gurl has an enviable amount of feminine outfits, shoes, make-up, dresses, panties, skirts, wigs, etc. etc., all stored away, but readily available for when Steph wants to play. She has 30 pairs of shoes, for goodness sake! Stephanie has that rare luxury of not having to hide or feel guilty about her femme wardrobe. Not only that, she is married and has a wife accepting of her cross-dressing ways. Okay, some of her accessories--desires, fantasies, urges, are hidden, but they are intangible, and as such, can be locked away in the closet of her mind. 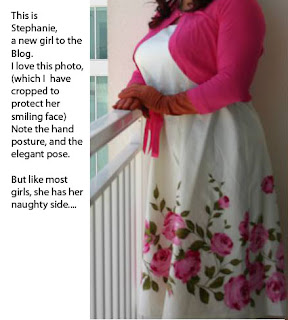 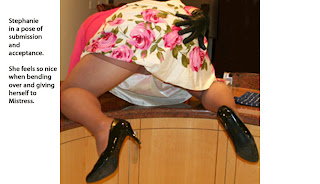 I know, for the less fortunate, the feminine wardrobe has to be limited, and for others even less fortunate still, the femme garb has to be tossed away, hurridly disposed of--purged. Far too often through fear, lack of storage, guilt, or the misconception that they can stop being gurly. This whole exercise, repeated again and again, can be so wasteful, especially in these economic times.

So, the idea struck me:

IF you are in a position where you have to toss your gurly clothes, why not take the time to drop off the bag of clothing (if unsoiled, of course) at the local charity shop, or goodwill, or Humane Society. It just makes sense, doesn't it? Okay, no tax deduction, 'cause I KNOW you don't want to hang around for a receipt. But, you will be doing some good in giving to charity. Charity? Nice name for a gurl too, isn't it.

So you see, the reason for my blog entry today is that I want all those unfortunate sissies out there who throw their femme things away for one reason or another, to just stop and think before heading to the nearest dumpster.

I can tell you horror stories about shoes, clothing, wigs, jewellery, and undies that have ended up tossed in a dumpster, forever doomed at a distant land fill, and why? Because a sissy got scared or went into denial, or did not have storage facilities. Point in case, one sissy of mine, named Kimberley, tossed over a $1000 worth of clothing in dumpster. Yes, I was quite annoyed by this. Well, for one thing, I had gone shopping and bought those items for her, taking great care in choice and sizing. Naturally, I didn't spend my own money, and obviously I was paid for my time, but still... such a waste! And, worse part is, he has done this on three separate occasions. Speaking of Kimberley, I have personally known this little sissy for over 7 years. Got him as a young thing, still in college. But, that's another story, and will no doubt come to my readers in more detail at another opportune moment.

Now, it's not just the unfortunates who can do some good here. What about the gurls who just get tired/unexcited by their hardly ever worn shoes/boots/dresses, and whatnot, 'cause I know gurls love new things to wear. Again, take the unexciting items of clothing to your favorite charity shop/drop off area. I do this all the time. When I get bored with clothes I haven't worn much, or shoes that pinch my toes. Off they go to my personal pet charity.