A different sort of sissy...

There are various types of sissies, and not all want to suck cock. No, for some sissies it is more a lesbian thing. They want to be accepted as a woman and be with a woman. These sissies are not looking for humiliation--they are looking for entrance into the sensual world. I will converse further regarding this type of sissy at a future time.

Today I am adding a photo of another type of sissy. Sissyslut Gus is very much into humiliation and pain. In fact, one might class him as a pain-sissy slut. I am adding him to this blog because he does wear the clothes, and has definitely pushed 'common sense' out of the window (as so many sissies like to do).

This sissy has done the most diabolic things to his body and to his little dick in order to get a chuckle from me. He has been with me for quite a few years, and I have to say he has only got worse under my guidance. Heavens knows where he would be without me! I have whipped him, beaten him, paddled him, and tried my best to make him cry, (he has a very high pain threshold). I have had his nipples clamped, poured wax over his little penis and balls, and used many an object, from household to homemade, as instruments of pain upon his body. I have had him bound and tied, weighted down at his balls, and so much more, and yet... he comes crawling back for more and more.
I have come to know much about my little slut, and I know that in his regular everyday life he is one of the boys, working in a field where love and care are necessary. I commend him for that. I am also of the opinion that he is a social guy and liked by his Friends. They often call him while his arse is being spanked. He has a wonderful girlfriend who knows nothing of how perverse he is, and... it's a jolly good thing too. She would probably feel sick and dump him. And this is where I enter in and make sure she doesn't need to be bothered by his peccadilloes.

As his Mistress, I can be amused by him, feel no qualms in using him, and actually take care of him in his need to humiliate himself before a woman. I can do this and remain at a safe distance from his regular life. Left to his own devices, (especially this little sissy slut) he would probably put everything he has worked for in jeopardy, including the love of his life. You see, he has this little thing, a kind of restless craving, that excites him and could get him into trouble. A little thing beginning with B. Any guesses? Blackmail.
It can be a dangerous thing, and he is just silly enough to get excited by the prospect of being blackmailed and exposed. Silly sissy. Of course, this is in his horny state of mind. For instance, I have tons of really humiliating photos of him in full view, face exposed, and email address of girlfriend, work email, telephone numbers of various people, blah blah blah... Now, all that information in the wrong hands could be... Well yes, dangerous. You see now what I mean by 'heavens knows where he would be without me'.
Anyway, this little sissy doesn't desire to suck cock for a Mistress. In fact, excuse the pun--it's never come up. We play a different game, and both enjoy the antics of the game because it works for both, just on different levels. Of course, the levels are obvious--Mistress on top! I see no point in trying to persuade someone to do something I know deep down they will not enjoy... or learn to enjoy.
As I go forward with this blog, I hope, through my little tribe of sissies, to show that although the theme is usually familiar, every sissy is, in fact, quite unique.

Learning to walk in heels 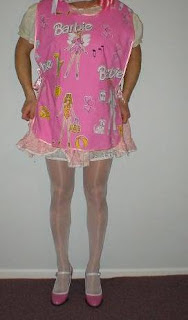 Without training, walking in high heels can be difficult for the sissy. It is a tried and true fact that practice, practice, practice is required in order to walk with confidence and a feminine flair in high stiletto heels. Even real women know they have to train the arches of their feet if they want to wear those beautiful sexy heels for any length of time.

Where the sissy sometimes comes undone is that he concentrates on just training the arches and forgets about posture--the feminine posture. For a woman, feminine posture is a natural thing; for the sissy, it is something which needs to be developed.

Very simply, the lesson Learn to Walk in Heels is that the sissy practices walking in small heels, with a book placed squarely on the crown of his head. The daily lesson begins with just 15 minutes, during which time the sissy should go about his chores and walk around. This helps his feeble concentration to be centered on posture--shoulders back, tits out, thus training the body to move in a more feminine way. Mincing... the feet should taking little steps, the arms hanging nice and loose at the hips.

If the sissy manages to last 15 minutes without dropping the book, he can move up to the next level. If he drops the book he simply follows the Academy's discipline guideline book for each 'Ooops, I dropped the book' occurrence. Rewards and Disciplinary Measures are the backbone of the Academy's method teaching, along with motivational grading on to the next level.
One new sissy is just embarking on his new walking in heels course. This is from his sissy journal...

"i could not wait to do my walking exercise. i did last 10 minutes this time until the book fell, how sissified i felt while having to maintain perfect posture!!! "
"I was soo excited to get started on my first assignment. i put on my posture collar as instructed and picked up a book then set it on my head. Mistress was right my shoulders were straight and my breast protruded like i have never seen them before. i walked slow and very very erect! my earrings were not even dangling because i was moving soooo slow to avoid dropping the book. i can't believe how sissified and helpless i felt with the book on my head!!! i felt even more sissified then when i curtsy! Just when i thought i had it mastered the book fell. Less than 5 minutes and i had to stop and add the ball gag. Adding the ball gag harness was even worse, i felt even more sissified and helpless!!!!!"

This lucky sissy is following the Academy's personalized program, BUT any little sissy can benefit from this simple daily practice of walking in heels with a book on the head. It might not be as much fun as being a pupil in the Academy, but it will have results.

Posted by Ms. Londoncalling at 1:57 PM No comments:

Welcome to the London Academy for Lost Sissies

Ms. Beverly has been dominating men, in many a fashion, for quite some time. This Blog is her first and she has dedicated it to all the little sissies she has come to know, love, laugh at, and ridicule in her distinctly upper-crust English style.

BUT, having said that, She also knows there are many still lost and wayward sissies out there searching for guidance and control. The Academy welcomes all lost and wayward sissies in need of a sanctuary, learning, and self exploration of the feminine side. For this reason, the reader will find excerpts from some of her sissies' journals, photos to encourage, and words of wisdom and joviality to help the budding sissy grow to full potential (whatever that is!)

Ms. Beverly wants the reader/sissy to feel like this blog is their secret pink library within the Academy. She also encourages comments and open dialogue of a polite and appropriate sort within the Academy blog.

Posted by Ms. Londoncalling at 11:15 AM No comments: