UPDATE OF THE MATTER...

Amendment to this blog entry.
Stupid was enjoying the exposure a little too much for my liking. Hence the swift removal of his photo. He just doesn' t deserve to be exposed. My apologies to all other readers.

Original entry:
The picture says it all. This sissy does not know the different between the words 'silly' and 'stupid'. He has always had a 'hard' time differentiating between the two. This is an example of stupid:
He gave a Mistress a full video of him being.... 'silly', which was rather 'stupid' of him when he knew full-well he would end up pissing her off. So, when he came crying to Me, his long term Mistress, I said he was.......... stupid!
These photo will be up until I am satisfied he has learned the important difference between the two aforementioned words. Let it be known, I don't expect him to suddenly develop an interest in pouring over the dictionary, but it will for a moment make him aware of his own... stupidity. 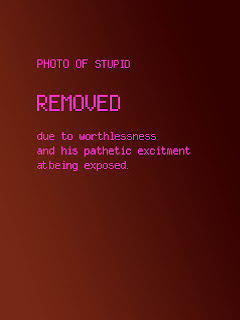 Posted by Ms. Londoncalling at 9:12 AM