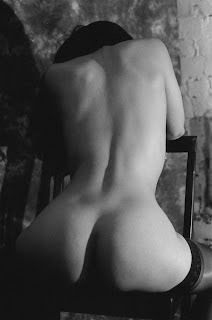 It can be painful, this situation. A man out of sync with his body. His spirit and essence, really.

Rubin, who has now adopted the name Rachael, came to me in pain. I’ve given birth, so I know pain – and I heard incredible pain in rachel’s voice. Confused. In denial. Unsettled. she was on the border of two states: self-loathing for not being a woman, and self-loathing for being an utter slut.

I’m not a therapist, but rachael found consolation in our conversations. And I came to learn a great deal about him.

Not a man. Not a woman. Proper and responsible. Yet driven to debase himself. From Gent bathrooms in the park to glory holes in a back room, a walking, talking, breathing orifice – or two, actually. His/her only criteria: that the man be rough with him and discard him.

No wrap around. No pleasure. Her clit untouched, her throat and ass exploited.

These forays into the night left him feeling empty afterwards. Totally empty. A shell. A void, really. Ashamed of his need, of being driven.

Compelled. Against his better judgment. Against his sense of decency. Slowly but surely, rachel was destroying rubin.

Over the course of many conversations, rubin reached a point where he could acknowledge the – well, let’s be plain – her compulsion and to call it what it is: a need. A need he/she can’t control. rachel is part of who rubin is. Wicked in the least playful of senses. Demanding. Overbearing. Unrelenting.

she craved. And craved. And craved. Quite literally, her body had involuntary responses. When the slick tip of a cock pressed between her lips, her sphincter tightened. Yes, that one, down by her clit. As it pushed over her tongue, it got tighter still. As it pressed against the back of her throat, before plunging down until its owner – rachael’s owner of the moment – could feel his sack slap rachel’s chin and grind against it, rachel’s ass pussy spasmed, her eyes rolled up in her head.

Speaking of her pussy, she wanted nothing more than to be split in two, feeling some anonymous, hairy chested ape slam his hips against her cheeks as his cock spread her walls. Her greatest sadness, perhaps, was the demise of the shipping industry: the docks just aren’t as well populated as they once were; merchant men with thick forearms and cabled thighs desperate to dump their loads indiscriminately into a sissy’s ass cunt. Abundant opportunities to flip down her skirt and feel his wetness slide out of her and down her thighs as she wobbled back to the safety of her home, her bathroom – where her douche was waiting.

We all have desires. Kinks. Some reside merely in our minds. rachael’s lived in her ass. In her core.

And it was destructive. he knew it. she knew it. But as she came to accept that she has no control over it, she at least had a partner in crime: Me.

I came to guide her. When she would go out. What she would wear. The shade of lipstick. What men liked to hear. And someone to report back to so she wouldn’t feel so isolated and abandoned to her need.

And then, one evening, she hit on an idea that was entirely appropriate to her, let’s say, position. One that gave her a purpose. A sense of worth. She needed to be my whore. Which is how I became – there really is no way to say this delicately, is there? – her pimp.

Flat rate. Mouth or ass, no difference. The sun goes down and out she goes with a sense of purpose and determination. It’s no longer just her need that is driving her: it’s her need to serve me. To earn for me. To work for me. To feel her nose press against the abdomen of a man she’s never met, barely spoken to, and won’t see again … unless she gets lucky on another evening.

rubin, rachael – whatever. She does this because it’s the only way she can feel feminine. For some, it’s enough to dress up. To wear a black velvet choker at the suggestion or demand of a Mistress, if they’re lucky enough to have one. For most, this is enough, and they’re quite happy with sporadic interludes into the feminine world. Some sissies only need a pair of panties on to feel they are submissive, or sexy, or gurly. For some it is merely a mental journey with fancies of this and that. For some sissies, they only feel comfortable exposing the feminine side to what they see as their superior—the female gender. The reasons are many and unique to that individual sissy.

For the others, the need is to submit, be used, taken, and abused by the male gender. It doesn’t mean that they’re gay. What it means, in rubin’s case, is that it is the ONLY path they see available to feel truly feminine. It is not an easy path to take, by any means, and for most I would not encourage the darker side of the night.

But for rubin the association is so definite in that he must feel humiliated to feel femininem and feeling feminine is an absolute need. When she feels the roughness of a man’s hold on him, she melts into a twisted bath of femininity. she did not actively choose to be this way. It’s just simply is the way it is. She really has no choice.

As for where I fit in--I cannot change him--his self abasement is so deeply imbedded in his feminine side. So, what I have done is encourage him to accept it and know that he shouldn’t blame himself for this. Is it a chemical or social influence? That is difficult to answer. Its roots are unclear, but there is certainly one thing I do know: It is not a choice for rachael, but a need. And that need can be manipulated. It can be moderated. And it can be exploited.

And rachael, bless her sweet, little clit, is ever so grateful to have been brought to heel.

(As rachael progresses and rubin disappears, I will update on this blog).

Posted by Ms. Londoncalling at 5:08 PM No comments: