Yes, I am still in England.  I cannot believe it is already August and I arrived April 1st.  So you might wonder how my little munchkins/my little waywards of the Academy have been managing without Me.  Well, in truth, I could not leave them floundering around in frills and ruffles or kinkerly clad, without my encouraging words of wisdom.  So, basically I've made myself available, just not so often. After all, for the most part I am... only a phone call away.
So, a little ketchup.

London is full of wonderful sights, and you never know what characters are going to appear--bit like my phone calls, really.  Anyway, I thought I would share this with my gurls.  There is a way to dress up ridiculously sissified, and present yourself out in public, and... even make a few 'bob' from an audience of many.   Let me show you... 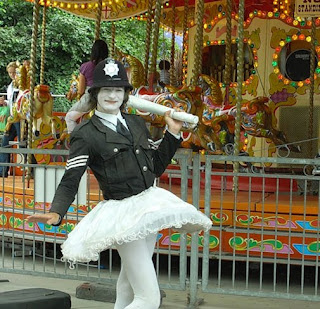 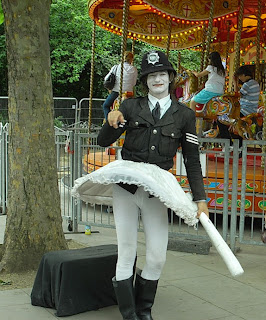 Oh, isn't he adorable, and as you can see this copper was having a ball.  Dressed in his little tutu, strutting his stuff and making.... wait for it, a 'bob or two'.  Wonderful characters/punters/artists are scattered along the Thames Embankment.  It was rather fun to see him though as I remember him being here in tutu over two years ago when I last visited.

There is something so totally ridiculous about a man in a tutu.  The immediate response is to just giggle. Man in tights, however...  can be impressive. 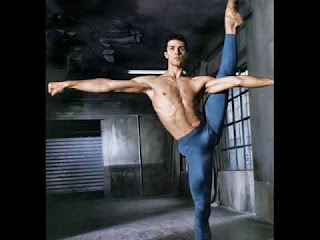 What about pantyhose (called tights in the UK)?  I've always said that men can look very sexy in sheer pantyhose.  It can also be  very erotic if both  woman and sexual partner (male) don pantyhose and rub up against each other. It makes for some interesting friction. Slipping and sliding back and forth, rubbing, pressing against the hips, the bottom, the crotch, the inner thighs.  And why limit oneself to pantyhose; a man can still look sexy in a silky or nylon pair of French cut panties, pulled up nice and tight over the pantyhose.  But...  once ruffles are added, how quickly lust disintegrates into giggles.  I can dress a man in very feminine garments and find him so hot and sexy I just want to rip his panties off!   I can also dress a man in feminine garments and find him so absolutely pathetic, all I want to do is ridicule him. It's just not fair is it.  What makes one man in panties a total sissy, and another man hot?  Perhaps it is all in the attitude, confidence, and openness in his desire to be accepted rather than scorned.

This is Ms. London's random thoughts
until the next entry.
Rachael, if you are reading this, call me, darling!

Posted by Ms. Londoncalling at 1:18 PM

So wonderful to again see your site updated. And what an interest line of thought: "What makes one man in panties a total sissy, and another man hot?"

As you noted, what you perceive is intrinsic to the man. A real man, one with self confidence in himself as a functional male, is unaffected regardless of what he wears. But, a sissy .. one who so desperately attempts to conceal his innermost secret .. well, that is something quite else, isn't it? He/she is suddenly revealed .. the external facade of maleness has been stripped away and he/she has been reduced to his/her primary self. He/she is aroused .. no longer just by his partner but rather by the touch of the panties against what should be the core of his maleness .. and by the debased shame the ridicule of his/her partner elicits.

Perhaps every woman before committing herself to a man should dress her partner so. She will know early in her involvement whether she is involved with a real man .. or with one a very different potential.

Ahhhh, Jennie, you always put light to my random thoughts. I do appreciate your insight and comments and now I have to ask... Are you hot?

You asked "Am I hot?". Alas, the answer is 'no'. I have always wished I could be (as I am certain so many sissy males do). But I learned long ago with several partners that once my true nature is revealed, I am incapable of resisting the allure of submission and emasculation. To most of those partners, a keen disappointment; to a precious few, the opportunity to control in a way they perhaps never thought possible. For one .. the unforgettable Vera .. it was a way to make up for a life of male domination as a child, employee and spouse. I can only hope my influence on her was as strong and enduring as hers on me.

Jennie, thank you for sharing. Maybe you will share with us here some memories of Vera. I know I would be interested.