doing in a glory hole? Yes, that's what I asked myself as I sat in the jacket pocket of my sissy slave. 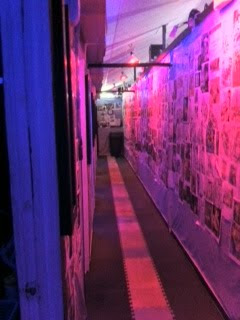 I was pretty close to his heart, and I swear I could hear his heartbeat through the phone, but he was brave and I was encouraging. As you might already surmise, I was on his cell phone, a hidden witness to what for me is the underworld of cock.

We had been planning this all week and now the hour had come.  Wearing panties and bra underneath his boy clothes, we discussed in the car, outside the Adult Store, what he needed to do.  In we went, and he paid the $10 to go to the back rooms.  We whispered, he took photos, and we waited...

Through the hole two fingers came, which apparently is a signal.  I can't actually remember if there was a signal back, but down my sissy went on bended knees.  Through the hole the cock appeared and I listened to the sounds of sucking from sissy's mouth. After a bit, the cock squirted (in a condom, I might add) and it was over without a leave or thank you.  My sissy felt proud of doing such a good job and having such a quick finale.  "Did I do good, Mistress" sissy asked, knowing full-well, she did!

She wanted more, which really surprised me because I thought one would do to satisfy a fantasy that had been held for years.  Silly me!  In to another room we ventured, and waited.  After a few minutes, we heard a door shut somewhere down the hallway.  Off we went, searching for more, and more there was.  But nothing quite as satisfactory as the first one. Sissy began to lose her pride and wondered why the cock disappeared without the finale.  I found the loss of pride to be so funny and laughed at my little sissy.

After awhile, we drove to another adult store.  In we went, and there they had a communal room (well, I'm sure it had a different name than that, but...)  I heard my sissy ask a man in there "Can I help you with that?"  I heard the reply of "No thanks, I've got it covered."  Poor sissy got a bit dejected from that, but back to a private cubicle room and a cock soon appeared.

After a bit, we decided to return to the first place where there was more activity in the rooms.  At this point, I advised that this time sissy should be on the receiving end, purely (pure?) to learn what her mouth must have felt like.  Always obedient, well, almost always, sissy went in and put her cock through the hole,  and that was sissy's finale.  What she didn't know, but will learn here when she reads this, is that I wanted the evening to end on a high note and not a negative note.  She was gungho to keep at it, but when does a sissy know when to stop?  She doesn't.  That's why she needs a strong woman to tell her "that's enough for tonight!"

I know sissy will have memories of this night for a very long time.  A fantasy finally satisfied.  I was happy to guide and help, and in truth I don't think sissy could have done this without a little 'English Courage' in her pocket.

I do not have an agenda for all sissies to suck cock.  Far from it.  But, I did rather enjoy the whole seediness of it all, the absolute disregard by receiver and giver for any human contact, other than the cock.  I don't believe the separation wall is there just for anonymity.  I believe it's there also because men who go to Glory Holes aren't gay... they are either cock pushing perverts or cock sucking kinksters. Either way, they aren't looking for a relationship of any sort.

What can be more humbling an act than sucking on a cock where the individual is of no regard.  In the case of this sissy, I know the primary emotion he had to feel was that he was pleasing Me. And he did, mainly because he actually followed through.   I've not giving his name here because if anything I am always discreet.  But let me say,  this sissy is a highly regarded professional, outstanding family man,  and has a lot to lose if he was ever caught. I think that was part of the thrill too--being such a slut on bended knees sucking on cock  in a glory hole was completely incongruent with, what is essentially, his inherent decent and moral character.  Maybe that's what made it fun for me too.

So, I sort of understand the one who sucks, and the conflicting needs that can pull him into the undertow, but the guy with the cock in the hole--well, he is more a pervert, isn't he?  His needs are much more base, aren't they?  He doesn't need to feel much of anything.  He's there just to get off, no?  So call me weird, but I have more respect for the one sucking, than I do for the one getting his cock sucked. Now, isn't that confusing for a sissy!  But hey, it's a complex, often confusing, sexual world, at least through my eyes.

A week later, we met again, not in his pocket because he was wearing a pink tank top, tight Lycra shorts, and panties on underneath, a few bangles around his wrist, and  lipstick on his lips.  We went to a conservation park and took a walk through some woods.  Back to nature.  No one around.  We spoke of glory and  agreed it should not be a regular foray.  As I type this I am now thinking of that song by Springsteen... Glory Days.

I changed the template of this blog.  I like to change things around.

What a lucky sissy to have such a caring Mistress guiding her along. Sounds like that sissy really wants to please the superior female and emulate the superior sex! Good for her.

yes, you have her pegged!

A wonderful post, Ma'am. sissy has the same feelings of going to an adult store and sucking at a glory hole. But sissy never did. Did frequent a gay establishment where the proscribed dress in the back was underwear or nudity. sissy wore panties and could see many suckings and fuckings. But sissy was too afraid to participate altho did have clitty sucked once. Thanks again for your writing and congrats to your sissy for pleasing you.

thanks, sissy becky. Sometimes, one just needs a helping encouraging hand to give a little push. Thank you for your comments here.

Wonderful blog Mistress, very evocative and fascinating content as ever.

I just wonder whether I would have the courage, and/or motivation from You to do something similar myself....

Love this story!! Not sure I could do it, but it is soo hot! Yes, the degradation...wow!
You are SO right, a sissy does NOT know when to stop, he/she must be told by his Dom!
Thanks...

Thank you for your comments, coco and weave. When to loosen the reins and when to pull back on them - a tricky decision when a Mistress finds herself riding a thoroughbred sissy. She wants to win the race, but at what cost to her ride?