HALL OF SHAME This one is for Joe Williams 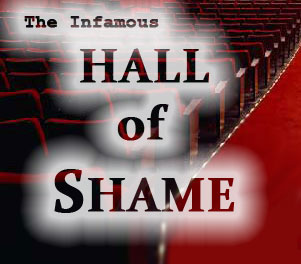 I do believe I have mentioned this slut before.  In brief, he wanted to be exposed for the slut he is - a total cocksucker, if ever there is one.  There, I put that up front, so that the more sensitive (gurl-on-girl) sissies can just STOP HERE.

Anyway, he called me the other day and more or less begged for me to give mention of him on my blog.  I try to do my best with polite requests, so here goes.

Apparently, (allegedly) Joe Williams' brother-in-law, Jerry, witnessed Joe coming out of a 'bath house' and rather naturally assumed he was there for some hanky-pansy, homo sex.  On confronting Chris with this knowledge, his brother-in-law ridiculed him to no end, and then promptly informed his wife, Pattie, of her brother's homo-tendencies.  Long shot of it all, his sister set him up with a guy from where she works.  She thought it funny (sad-funny) but being sisterly, wanted him to find a nice man to date and have sex with, perhaps to keep him out of the bath houses.  Makes sense.

The nice man, who works with  his sister,  agreed to meet up with Joe.  He turned out not  so much gay as dominant. Or was he?  I tend to think it is rather the stronger rise to the top when in the company of someone they see as their inferior.  Joe definitely fits this bill. Totally lacking in sexual prowess, has low self-esteem, and believes himself to be inferior to most men and women.

So, the nice man ended up taking Joe back to his place.  Once there, with as little communication as possible, he ordered  Joe suck his dick, and then finished off by doing him in the arse.  You know, a typical transitory evening between two males looking for dirty sex.  Oh, I almost forgot, Joe enjoyed a nice facial too.  And that was that.  No exchange of numbers. Out the door.  What this nice man's deal is, I don't know, but obviously that evening he didn't care where he put his cock.

I asked Joe  if he actually enjoyed it.  He stated that when he was being fucked, the one thought he had was 'hurry up and get it over with'.  In other words, he didn't enjoy it and yet he didn't leave.  He asked me if I thought he could ever stop doing these things.  I'm sorry, but my answer was NO.  This is not a passing experiment he can put aside.  The bath houses, the glory-holes, etc.,  are the places he has to go to in order to feel sexually charged.  A 'normal' healthy sex life is just not in the cards for him.

Joe has called me over quite a long period, and he has probably called other Mistresses in the past.  He's addicted, alright.  What his sister didn't understand is that he is not gay.  Life would be so much easier for him if he was.  I mean, how do you explain to someone who loves you, that the only sex you want is the degrading kind?  For Joe Williams, the best way to do this is with his mouth on a cock.

Some of you can relate to this.
Ms. London.

So, Joe... this one is for you.  You are now in the Hall of Shame.  Congrats!  And, I have decided to make a Hall of Shame for all those deserving of entry.